Annexation of Crimea by Russia. A book review for the Bar magazine. 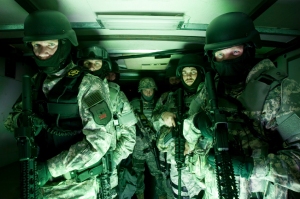 The Sleepwalkers: How Europe Went to War in 1914, by Christopher Clark.
Catastrophe 1914: Europe Goes to War, by Max HastingsBloodlands: Europe between Hitler and Stalin, by Timothy SnyderNo Simple Victory: World War II in Europe 1939-1945, by Norman Davies

The recent annexation of Crimea by Russia, and the Russian instigated war in progress in Ukraine (albeit for now a small one), invite comparison to the origins of World War I and World War II.  These four books, three of them recently published and one from 2007, provide a good place to start.Sleepwalkers, a New York Times Important Book, is inaptly titled.  It is a long and densely detailed story of how the war started, focusing on the role played by Serbia and the Russian ambassador in Belgrade in sowing the seeds for the assassination of Archduke Ferdinand, and the assassination’s  centrality to the series of events culminating in Germany’s invasion of Belgium in August, 1914.  The book’s title is inapt, because the book itself makes it crystal clear that the players who made the decisions producing  the war did so over time, with considerable deliberation, and with the knowledge that their decisions would almost certainly lead to a general European war.  They were not sleepwalking.  Clark, although a British historian, self-consciously avoids taking sides, but it appears fairly clear that the Tsar’s decision to announce the first general mobilization of the Great Powers was taken for the benefit of the Serbs, and in legal terms was the efficient cause of the war.

In contrast to Sleepwalkers, Catastrophe is shorter, oriented more towards the individual experiences of soldiers and civilians alike, and an easier and more enjoyable read.  Catastrophe takes a self-consciously British viewpoint of the beginnings of the war and its first few months.  Hastings is not shy about pinning the blame for the war on the Germans for giving Austria the famous “blank check.”  He acknowledges the thesis of the revisionist German historian Fritz Stern that Germany’s major goal in World War I was strikingly similar to its major goal in World War II, the domination of Eastern Europe.  On the other hand, Hastings fails to acknowledge the enormous role France played in goading both Serbia and Russia into war, while ensuring England would intervene against Germany.

Bloodlands, by American historian Timothy Snyder , tells the story of the bloodletting in Eastern Europe between the Wars and during World War II.  It is an alarming and ghastly tale of human suffering by civilians, from Stalin’s plunder of Ukraine and other non-Russian areas conquered by the Soviets following the end of World War I, through the contest for control  of Eastern Europe between the Soviet Union and Germany during World War II.  Bloodlands stands for the proposition that in terms of the slaughter of both civilians and soldiers, the number of combatants involved, and the scale of battle, World War II in the European theater of operations was fought primarily in and over what is now roughly Poland, Belarus, and Ukraine.

No Simple Victory might be seen as the precursor of Bloodlands.  It emphasizes that our perceptions of World War II are biased and parochial depending on our national and cultural perspectives.  For example, it is hard to argue with Davies’ thesis that the American contribution to the War was primarily the production and provision of weaponry and related supplies to the Soviets, and that the Normandy invasion and the liberation of France and eastern Germany was a sideshow in comparison to the series of colossal cauldron battles like Bagration fought successfully by Russia on the Eastern front.   Davies shows beyond a doubt that Eastern Europe – Estonia, Latvia, Lithuania, Poland, Belarus, and Ukraine – was the primary theater of the War in Europe.

Vladimir Putin is obviously a student of Russian and Soviet history.  He knows full well that Russia has exercised hegemony over Eastern Europe for most of the last 250 years, and that its eastern border has repeatedly been well within Eastern Europe.  Poland, Belarus, and Ukraine as independent, sovereign states are historical anomalies in modern history, not the norm.  Russia’s border has already moved west again to encompass Crimea, and threatens in the near future to encompass another chunk of Ukraine.

History has a way of repeating itself.  Russia is clearly a revanchist state bent on regaining its historically former territories, just as France in 1914 was bent on regaining Alsace Lorraine.  How will Russia’s current ambitions play out?  Its annexation of Crimea, like the assassination of Archduke Ferdinand, was no accident, although at the time his assassination did not seem to be a threat to world peace.  In addition to the annexation, we have a downed civilian airliner and a small war which might still get bigger.  If you’re Polish, you should be worried.